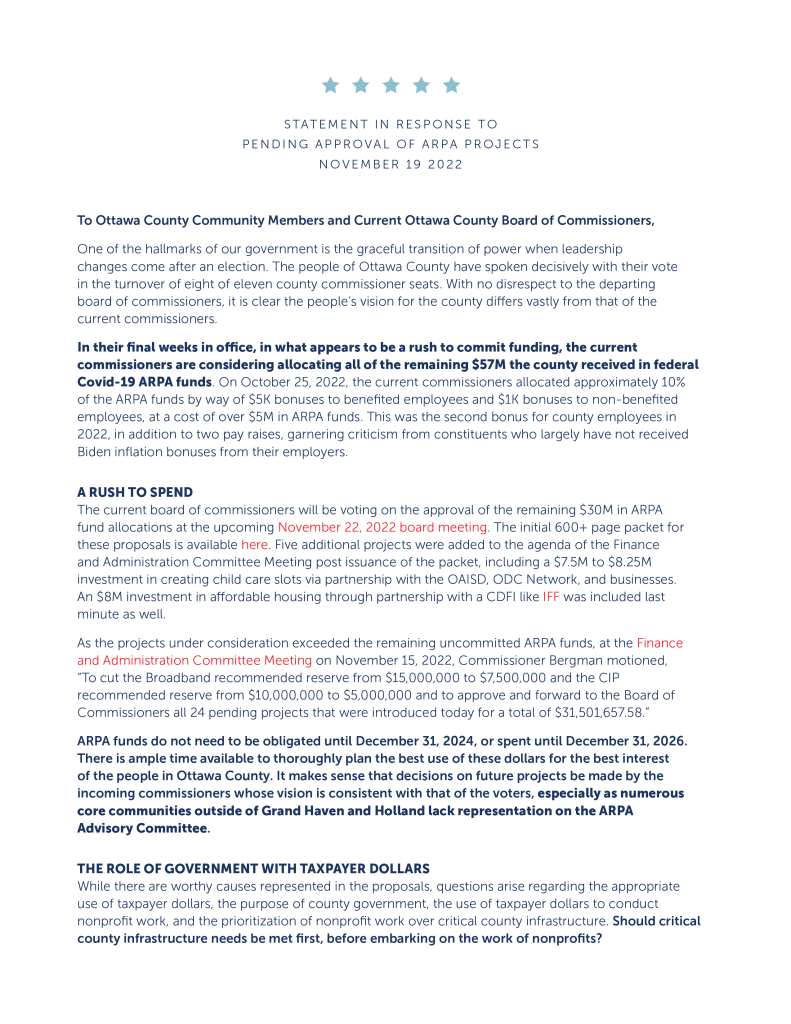 Numerous townships in Ottawa County completely lack representation on the ARPA Advisory Committee—a committee which possesses gatekeeping power to $57M, with no public presence or accountability applied during its work process.

The ARPA funds need to be more thoughtfully allocated, and the current process should be paused to ensure the fundamental needs of the county and ALL its people are met, including critical infrastructure.

The Ottawa County Board of Commissioners should pass the torch gracefully and allow the remaining ARPA funds be put to use in service of the voices and needs of the entire county under the leadership of the new county commissioner board in 2023.

Accountability and transparency are part of the Public Policy Agenda in the Contract with Ottawa.

The full text is also included below.

One of the hallmarks of our government is the graceful transition of power when leadership changes come after an election. The people of Ottawa County have spoken decisively with their vote in the turnover of eight of eleven county commissioner seats. With no disrespect to the departing board of commissioners, it is clear the people’s vision for the county differs vastly from that of the current commissioners.

In their final weeks in office, in what appears to be a rush to commit funding, the current commissioners are considering allocating all of the remaining $57M the county received in federal Covid-19 ARPA funds. On October 25, 2022, the current commissioners allocated approximately 10% of the ARPA funds by way of $5K bonuses to benefited employees and $1K bonuses to non-benefited employees, at a cost of over $5M in ARPA funds. This was the second bonus for county employees in 2022, in addition to two pay raises, garnering criticism from constituents who largely have not received Biden inflation bonuses from their employers.

A RUSH TO SPEND
The current board of commissioners will be voting on the approval of the remaining $30M in ARPA fund allocations at the upcoming November 22, 2022 board meeting. The initial 600+ page packet for these proposals is available here. Five additional projects were added to the agenda of the Finance and Administration Committee Meeting post issuance of the packet, including a $7.5M to $8.25M investment in creating child care slots via partnership with the OAISD, ODC Network, and businesses. An $8M investment in affordable housing through partnership with a CDFI like IFF was included last minute as well.

As the projects under consideration exceeded the remaining uncommitted ARPA funds, at the Finance and Administration Committee Meeting on November 15, 2022, Commissioner Bergman motioned, “To cut the Broadband recommended reserve from $15,000,000 to $7,500,000 and the CIP recommended reserve from $10,000,000 to $5,000,000 and to approve and forward to the Board of Commissioners all 24 pending projects that were introduced today for a total of $31,501,657.58.”

ARPA funds do not need to be obligated until December 31, 2024, or spent until December 31, 2026. There is ample time available to thoroughly plan the best use of these dollars for the best interest of the people in Ottawa County. It makes sense that decisions on future projects be made by the incoming commissioners whose vision is consistent with that of the voters, especially as numerous core communities outside of Grand Haven and Holland lack representation on the ARPA Advisory Committee.

THE ROLE OF GOVERNMENT WITH TAXPAYER DOLLARS
While there are worthy causes represented in the proposals, questions arise regarding the appropriate use of taxpayer dollars, the purpose of county government, the use of taxpayer dollars to conduct nonprofit work, and the prioritization of nonprofit work over critical county infrastructure. Should critical county infrastructure needs be met first, before embarking on the work of nonprofits?

The Ottawa County Board of Commissioners created the Covid-19 ARPA (American Rescue Plan Act) Advisory Committee on June 8, 2021. The ARPA Advisory committee, which assists in drafting funding priorities, contains heavy representation for the cities of Grand Haven and Holland, as well as of nonprofits and foundations, with two seats given to Muskegon Community College. Commissioners Roger Bergman of Grand Haven and Joe Baumann of Holland serve on the committee. However, there is little representation of the majority of the people residing in Ottawa County beyond the lakeshore.

LACK OF REPRESENTATION OF TOWNSHIPS AND TRANSPARENCY TO THE PEOPLE
Numerous townships in Ottawa County completely lack representation on the ARPA Advisory Committee—a committee which possesses gatekeeping power to $57M, with no public presence or accountability applied during its work process. The ARPA Advisory Committee meetings have not provided public notice or opportunity for attendance or participation, nor have agendas or minutes been made available to the public from the meetings. Should nonprofits be placed in a gatekeeping role on taxpayer dollars without full transparency and adequate elected representation for the people?

The following entered into financial Advisory Agreements with Ottawa County for their advisory work
and oversight of ARPA buckets:

The Bucket Managers solicit, assess, and recommend eligible projects to the ARPA Committee for consideration. Recommended projects are presented to the County Finance and Administration Committee, and then to the full Board of Commissioners for final approval. The remaining bucket areas are coordinated by county staff.

With all due respect to the individuals involved, nonprofit organizations, foundations, and leaders of Muskegon Community College have not been elected by the people of Ottawa County, and should not have been granted the power to be gatekeepers of county taxpayer dollars through a nontransparent process. Ottawa County needs to go back to the drawing board and ensure true representation and transparency for all communities in the expenditure of these taxpayer dollars.

CRITICAL NEEDS UNMET
Beyond the lack of transparency and elected representation, Ottawa County has critical infrastructure needs, including water, which should be given priority consideration. Businesses, children, and individuals have suffered direct impacts due to Covid-19 measures. These areas of need are being addressed by other counties through the use of ARPA funds. The ARPA funds need to be more thoughtfully allocated, and the current process paused to ensure the fundamental needs of the county and ALL its people are met. The current county motto declares Ottawa County to be a place where everyone belongs and is represented, not only those along the lakeshore.

Lack of alignment with the people led to the changes in the Board of Commissioner seats in the 2022 election cycle. Keeping the people from the table in regard to ARPA funds—funds paid for by taxpayer dollars, is unacceptable.

We ask the current Ottawa County Board of Commissioners to pass the torch gracefully and allow the remaining ARPA funds be put to use in service of the voices and needs of the entire county under the leadership of the new county commissioner board in 2023.

For Transparency and Representation,