What We See: Thoughts from the Founders of Ottawa Impact

In his farewell address, President Reagan encouraged us, “Don’t be afraid to see what you see.” In the midst of the 2022 election cycle, we pause to share what we see. 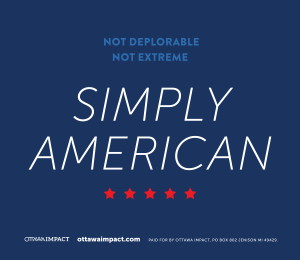 America is an exceptional nation made up of a diverse and beautiful people. Historically, the people have too often been caught in drama between political parties, with neither party being perfect, and elected officials more focused on their own power than the people they represent.

We believe in the goodness of America and seek what is best for her people, including the protection of American values, individual freedoms, and especially parental rights.

While most of our attention has been on restoring the county and the platform of the Republican Party, we would be negligent if we didn’t address the changes we see on the left. The Democratic Party is currently led by radical progressive Marxists who seek to divide the American people, rapidly bringing our nation to a state of decline which is nearing socialism and communism.

We welcome common sense Americans that the Democratic Party has left behind— to join us in our efforts as we work to protect children and parental rights, and restore our schools, our county, and our country.

The Democratic Party’s strategy is built on: instilling fear over race and sexuality issues through the BLM and CRT movements; hostility towards parents, freedom, and faith; alliance with the fake news media; and squelching free speech through cancel culture. In 2019, Americans began to awaken to the latter with the media’s bullying of the Covington boys, and the legal liability of multiple media outlets for defamation.

The Democratic Party finds itself in conflict with God on a variety of issues— the most recent being late term abortion, over-sexualized materials for children in school, and overriding parents on abortion and gender transitions for minors (literally attempting to override a child’s gender given by God). Yet removing and opposing God is never a wise strategy. Faith is core to many minority families which the Democratic Party relies on to retain political power.

The progressive left has mastered the art of redefinition in the promotion of their agenda. They have redefined the core building blocks of society, redefining marriage, what it means to be a man or a woman, a boy or a girl, and even the ability to fluctuate between the two. The left has redefined “racist” to largely apply to conservatives, an “oppressor” to be a person with white skin, and the “oppressed” to be a person with darker skin. According to their divisive theory of intersectionality, the worst oppressors possess the characteristics of being white, male, Christian, identifying with the gender assigned at birth, and heterosexual.

When progressives talk about the separation of church and state, it is critical to understand the left is not seeking to divorce government from morality, or even from religion. The radical left is divorcing government institutions from American values, traditional Christianity, and other morally aligned religions, and instead institutionalizing their radical beliefs on morality, race, and the religion of secular humanism, which could be aptly renamed sexuality humanism, into government systems.

People of faith, those who hold to American values, make up a significant voter bloc which crosses ethnicities, and has the power to swing elections on a national level. The Democratic Party’s move to the radical left— their bold redefinition of foundational truths, the desire to end the lives of full-term babies up to and on the day of birth, their move to indoctrinate children on race and sexuality, to take over the medical care of children with abortion and gender transitions— all while calling parents extremists, has activated the church on a massive scale. The majority of Christians do not align with these radical, society shifting, unbiblical moves.

American Christians largely love God and love America, and a growing number are actively seeking to defend and protect America from the radical agenda of the left— preserving individual freedoms, American values, and parental rights. Numerous religious and minority thought leaders like Voddie Bauchman, Thomas Sowell, Bob Woodson of 1776 Unites, and Candace Owens are standing in defense of the faith and America in refuting unbiblical, Marxist ideology.

This has created a problem for the Democratic Party, which for so long enjoyed the luxury of the disengagement of Christians from culture and politics. As a voting bloc numbering in the millions, Christians cannot be ignored.

The Democratic Party’s proclamations of God, however disingenuous and erroneous the teachings, reveals their knowledge of the strength of the faith community and its ability to preserve and protect the country we love when we stand together.

To further counter the growing activism of Christians and parents during this robust election cycle, the public intimidation of conservative thought leaders and candidates has escalated, with the help of the progressive fake news media. The left, and even RINO’s defending their seats, have parroted inflammatory rhetoric accusing new candidates of racism, extremism, and Christian Nationalism. This has occurred on both a local and national level and sounds predictably similar to CNN and Biden’s Red Speech.

Many Christians are not bothered by the term Christian Nationalism, equating it to loving God + loving and protecting our nation, which is vastly true of those accused of being Christian Nationalists. But the left has applied a harsher definition, which evokes charges of racism, white supremacy, imposition of religious beliefs onto others through government, and other such extreme ideologies. “Christian Nationalism” is simply the latest slight of terms and defamation of convenience to affect the outcome of an election.

We should not be surprised that such a national strategy would be applied to Ottawa County, which has long been known to be a stronghold of conservative thought, American values, and Christianity. It is also a county which historically runs deep red, with numbers capable of impacting state and national elections, and so the presence of Soros funded initiatives to impact elections and change the religious and cultural beliefs of our people is not surprising.

We recognize government will never be perfect as long as imperfect people are involved, and we have no desire to force religion on others through government. However, it is also not constitutional for the radical left to institutionalize and impose their religion of sexuality and secular humanism onto children, parents, and individuals through schools and government. They are not entitled to raise our nation’s children as their own.

Ottawa Impact PAC has intentionally sought out strong servant leaders to run for office in Ottawa County, individuals who are not seeking to promote themselves or their political careers, but who desire to work with courageous resolve for the best of our people and our country. Vetted candidates are hardworking Americans who bring a love for people from their work in nursing, medicine, social work, teaching, government administration, the military, and business. Labeling these amazing individuals as extremists and using the implied harsh definition of Christian Nationalists to describe them is laughable.

We are simply Americans. Americans who love God, our country, and our children. And we love you, The People.

Please join us in defending our piece of America!

“There are no easy answers, but there are simple answers. We must have the courage to do what we know is morally right.”